Here's the second part of my shortwave reception reports for Jan 2006. You can read the first part if you haven't already.

* 19 Jan 2006: 0615 UTC: 6035 khz (VOA English to Africa): Okay, I didn't write anything down about this broadcast because I was eating pizza, and interference made listening difficult. Usually, this is a good source of African news. SIO 422.

Ang Lee won Best Director at the 2005 Golden Globe Awards. Often the Golden Globe Awards are a good indicator of the results at the Academy Awards. Lee was worried about the initial reaction to Brokeback Mountain in the United States.

* 21 Jan 2006: 0520 UTC: 6000 khz (Radio Havana Cuba): Iran has 40 underground facilities involved in its nuclear program. This was discussed as part of the story that Israeli pilots trained for attack on Iran.

Several investigations are considering the CIA's rendition practices. It's likely that there were more than the 2 confirmed flights for transporting terror suspects. More on this story in the article, Leaked British memo renews debate on CIA flights. SIO 434.

* 21 Jan 2006: 0700 UTC: 5950 khz (Radio Taiwan Intl): Taiwan's largest airline has a new flight to Shanghai for the lunar new year celebration. "Direct flights between the two countries have been banned since 1949. Normally, flights between the two countries have to go through a third point -- usually Hong Kong or Macau." On Friday, stocks on the Taiwan Stock Exchange opened higher but closed lower. SIO 434.

Demonstrators protesting King Gyanendra, and calling for election boycotts, have been arrested in Nepal. Mobile phone calls are being blocked. Read more: Violence breaks out during demonstrations in Kathmandu.

Heavy snow in Norway knocked out power for tens of thousands. Here's an article from the Norway Post: Major power outages in southern Norway.

The drinking age in Holland could be raised from 16 to 18 to curb youth alcohol abuse. 16-year-olds are allowed to drink beer and drinks with an alcohol content of 15% or less. During an interview for this story, a girl in a bar said she drinks "six shots on average. Sometimes that would be the goal." SIO 545.
authored by weatherall at 9:49 PM No comments:

Here's a recording of the MOG beacon I mentioned in longwave listening: jan 2006. I recorded this signal from my Sony ICF SW7600GR, then enhanced the sound with Sound Studio. The audio file is a 64 kbps mono mp3 file, about a minute long, and about 258 kb. Wikipedia has a morse code page listing the letters and numerals.

montague_airport_404_khz_excerpt.mp3
authored by weatherall at 8:33 AM No comments:

January 2006 has been a productive shortwave listening month for me, so these reception reports comprise the first of two parts.

Zimbabwe, in southern Africa, first held free elections in 1979 and achieved independence from Britain in 1980. Its population is approximately 13 million. The announcer, who later gave his name as Ted Roberts, amusingly said "I am back from a three-week vacation, quite rested, and everything is alright!" It's always fun to hear humanizing elements in these broadcasts. So there's a currency black market, and the government seeks to remove US dollars from circulation by offering Z$87,000 in exchange for each US$1 (see Zimbabwean dollar on Wikipedia). The country suffers from chaotic economic fundamentals, and further economic decline is expected.

"Liberia is next." This night train show features a train conductor saying "All aboard...the night train!" between each segment along with train sound effects. Weird! Liberia is inaugurating a new president. Ellen Johnson-Sirleaf is the first elected female president of an African nation (from Wikipedia, not mentioned in the broadcast). Extra security is on hand for the event. Laura Bush will attend. Two U.S. Navy ships are in Liberian waters. United Nations helicopters and armored (armed?) vehicles are present. No problems expected; they have "the right arrangements." The country is emerging from 25 years of violence, and is under an arms embargo.

Now discussing Sierra Leone. Population is around 5 million; English is the official language. This country is recovering from civil war. Its residents suffer from the plagues of drugs, prostitution, HIV/AIDS, and child trafficking. Children are sent to work instead of school. Kids sleep on the streets; they left home because their families were too poor to support them. Children used for prostitution or forced labor. A 14-year-old boy earned money by carrying heavy packages. He spent all his money on gambling and drinking.

To conclude the half-hour segment, there was "an editorial reflecting the views of the U.S. government." A discussion of Iran's nuclear plans. Condoleeza Rice said "nobody wants to islolate the Iranian people. ... this is a great civilization and these are a great people."

* 17 Jan 2006: I happened to be home at 2000 UTC, and saw on Primetimeshortwave.com that Israel broadcasts to North America at this time. Unfortunately, I couldn't receive it on any of the listed frequencies. I imagine this would be an interesting broadcast, especially to hear their views regarding Ariel Sharon's health problems. Subsequent attempts to tune into this station at 2000 UTC have also failed, and I emailed the station engineer about it. I also posted to rec.radio.shortwave about this. A listener in Michigan is able to receive it, but a listener in nearby Ventura, CA, is not.

* 19 Jan 2006: 0530 UTC: 6000 khz (Radio Havana Cuba): "I'm Ed Newman, fighting a terrible cold." (He sounded like it!) During the international news segment, they discussed the Bush wiretapping issue. Here's a related article from Radio Havana Cuba's website: Two U.S. Groups File Lawsuits over Federal Eavesdropping. A participant in this lawsuit said it was "a return to the bad old days of the NSA."

Another story discussed on the radio: NSA Spy Information Led To Dead Ends.

The Chinese economy is growing due to the upcoming Beijing Summer Olympic games in 2008. Construction is the main benefit, and the city is spending $16 billion to prepare for the games. Surprisingly, I didn't hear any mention of the World Baseball Classic during RHC's sports segment.

During the mailbag show, the announcers thanked listeners who sent new years greetings. One listener, a teacher who uses shortwave radio in his 3rd grade class, wrote to ask about Cuba's education system. The school day in Cuba is from 8am to 4:20pm. The school year begins at the start of September and runs until the end of June or the beginning of July. Education is compulsory until 9th grade, after which students can enter three years of pre-university. After that, they can advance to university. Cuba's university preparation programs are believed to be better than in many other countries. I would be curious to understand this last point in more detail. SIO 533.
authored by weatherall at 9:07 PM No comments:

Radio Tashkent's current letters review page discusses the issue in more detail. (I will need to update this URL to an archive link at a future date.)
authored by weatherall at 10:36 AM No comments:

According to DXing.com's Longwave DXing page, "[t]his range is used mainly by navigation beacons, which continuously repeat their call signs in Morse code. ...the call signs usually give an idea of the location of the beacon."

A Google search for "navigation beacon" mog found a page of Low-frequency navigation stations. MOG is a non-directional airport beacon in Montague, California. The airport is just south of the California-Oregon border, approximately 300 miles from my listening location.
authored by weatherall at 12:24 AM No comments:

defective e1xm, not part of recall

Fellow Blogger user Robert Brunner describes his defective Eton E1XM, which has a serial number outside the range of the recall. He called Eton, and they're going to have R.L. Drake service his radio.

Passband's Receiver News has a technical description of the problem with these defective E1 units.
authored by weatherall at 9:53 AM No comments:

Here are assorted reception reports from my December 2005 trip to upstate New York. These receptions were often just a few minutes long to determine the SIO code, content, and station identification.

* 0438 UTC: 6165 khz (unknown): Should be Radio Netherlands in English; sounds like German or Dutch. SIO 555. Could it be Hrvatska Radio from Croatia? Update: Radio Netherlands isn't currently broadcasting on this frequency at this time. That's unfortunate, because it was one of my favorites during 0400-0500 UTC.

Thanks to the Passport to World Band Radio folks for posting the unfortunate news that Sony has discontinued its AN-LP1 active loop antenna for the American market.

I occasionally use a Degen DE31 active loop antenna, and visitors to my apartment will see it hanging in my living room window, wires dangling and primed for one of my several radios. I'd like to have a Sony antenna, in part because the AN-LP1 got a good review when compared with the DE31 from our friends at Radiointel.com.

authored by weatherall at 11:15 PM No comments:

I heard commercials on shortwave radio for the first time during my trip in December. This was new to me so I jotted down these receptions. Both receptions were from WHRI originating in South Carolina, USA.

Thanks to Radiointel.com for reporting on the Eton E1XM limited recall. This Universal Radio link provides information on which serial numbers are affected, what the problem is, and how to contact Eton for service/replacement and a free gift. Eton is being generous in light of the problem.

If any readers are affected by this, comments are welcome on your experience with the recall.
authored by weatherall at 8:22 PM No comments:

qsl and more from cuba

I recently received a QSL card, a bookmark, and a new year's card from Radio Havana Cuba. Here are photos: 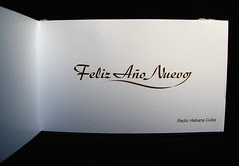 Inside of new year's card
authored by weatherall at 12:02 AM No comments:

A shortwave radio that can decode single sideband (SSB) can receive communication among ham radio enthusiasts. I scanned the 40 meter band and heard some conversations during my December 2005 trip to upstate New York.

21 Dec 2005 1830 UTC: 7245 khz ssb: A guy opined that DHL provided terrible service 20 years ago, but they are now as good, if not better, than the other shipping services (presumably UPS and FedEx). He's working on making a 10 meter antenna but ran out of time due to bad weather. He gave his callsign but I didn't hear it clearly.

21 Dec 2005 1833 UTC: 7255 khz ssb: This person wants warm weather, and plans to go to Ohio to visit grandkids. Various hams chime in on the political correctness of saying "Merry Christmas." They state that people complain about this phrase because they have too much free time. Callsigns were given but again I didn't hear them clearly enough to transcribe accurately. One ham is near Chestertown, NY -- about 100 miles from my listening location. Two guys whose names are Joe and Roy were talking about RF interference with a wife's computer. The computer was moved to the opposite end of a room (further away from the radio equipment) but this did not solve the issue. I started hearing tones transmitted on the channel. One of the hams noted the "knucklehead sharing his intelligence."
authored by weatherall at 5:33 PM No comments:

authored by weatherall at 9:22 AM No comments:

I've been using radiobanter.com for its interface to the rec.radio.shortwave usenet newsgroup. Someone started a thread to say that they bought a Sony ICF SW7600GR after owning a Degen DE1103. He wanted to know what to expect from the SW7600GR, and this witty reply was posted.
authored by weatherall at 11:15 PM No comments:

Mr. Weatherall
authored by weatherall at 2:09 PM No comments:

authored by weatherall at 10:16 AM No comments:
Newer Posts Older Posts Home
Subscribe to: Posts (Atom)

Copyright (c) 2005-2017 Cobalt Pet Shortwave / Mediumwave weblog. All rights reserved. Content appearing on this website may not be reproduced in whole or in part without written authorization. Please be aware that this site uses cookies.

What can you find when you tune in radio stations from hundreds or thousands of miles away? The Cobalt Pet shortwave and mediumwave weblog (or blog) is an English-language site featuring shortwave reception reports, product reviews, photos, tips, radio news, DXing discussion, and links. Articles focus on international broadcasters, utility stations, amateur / ham radio, mediumwave (AM broadcast band), and portable radio receivers. Readers are invited to leave feedback and ask questions.