It has unfortunately been a long time since I have published a shortwave summary here. I listened to a few stations in the past couple days and wrote some reports to share with you. I used my Kaito 1102 and my Eton E5 for these receptions.

* 30 Mar 2007, 0350 UTC, 7415 khz (WBCQ, Monticello, Maine, USA): Weight loss. "Cleanse the bowels"? A new product for incontinence. Interference from 7405 khz - Spanish - Radio Marti (which was a strong signal but had an audible running-water jammer). A phone number for this weight loss group is 866-229-3663. A mention of "First amendment radio". Some stats were given out about the effects of unnecessary medications and procedures. "These are only the documented cases." "The cure is worse than the disease." "Until next time, I wish you all to be well." Then, from the station itself: "Free speech radio, WBCQ, ..." This was an advertisement to announce the availability of airtime. "Get your message out on free speech radio."

* 0400 UTC, 6165 khz (Radio Netherlands): "It's 0500 hours UTC." Except: it's not! The United Nations proposes male circumcision as a method for preventing the spread of HIV. Discussion of the elusive Israeli peace plan. All other peace plans have failed. Saudis hosted the summit at which a new plan was discussed. Iran's capturing of British sailors is still a problem. Sailors appeared on an Iranian television broadcast; Britain is furious. "www.radionetherlands.nl". Dutch news summary (which I didn't log). Fighting in Mogadishu. African nations are hesitant to help out, because of the unknown duration of actions, the difficulty of paying for it, and the negative impact on other ambitions.

Dutch drug traffickers in Latin America are facing difficulties. They are seeking new routes to get drugs into Europe. The Dominican Republic, Peru, Argentina, and Brazil were previously used by the Dutch for smuggling. Harsh prison conditions await for those who are caught. Some get involved due to financial problems, seeking the easy money. The lead story for many Dutch newspapers is the situation of the captured British sailors. Abortion is still not available in Poland, even for special circumstances such as rape. Baboons are acting oddly at an exhibit in the Netherlands. An animal expert labeled the behavior as mass hysteria. The animals are not even tempted by bananas.

* 0431 UTC, 7120 khz (BBC): Zimbabwe's president, Robert Mugabe, is desperate to hold on to power, but is increasingly isolated. Tehran rejected UN Security Council call to release the British sailors. "Network Africa on BBC." "Live from London." Breast-feeding reduces the risk of transmitting HIV to the baby. A compilation of African music was created by the guy who taught Bob Marley how to play the guitar. I liked the music and I hope to obtain a copy of this compilation. This was presented in the context of discussing the abolition of slave trade in Britain. A person interviewed about this subject said that the "west" should say "sorry" many times and in many ways. She said that reparation money should be spent in ways that help everyone, such as developing roads and houses. The money shouldn't be given to individuals.

Sports news. A cricket player banned for 5 years back in 2004 denied involvement in match-fixing, and plans to play again when the ban is over in 2009. A famous lion, castrated due to deformed offspring, has died. BBC is hosting a "Who am I?" essay contest; entries should be 300 words or less. The prize is a free holiday in London.

Curiously, I can't find a listing for the BBC on 7120 khz with either the current primetimeshortwave or eibi schedules. Anyone know more about this particular broadcast? For some reason, I thought it was a relay by the VOA. [Edit: I found this transmission on the BBC schedule. The transmitter is in South Africa.]

* 0500 UTC, 6180 khz (Radio Havana Cuba): This broadcast will include information about the Cuban Five, and the Caribbean Outlook segment. International news with Ed Newman. Karl Rove subpoena paperwork is ready. United States Attorney General Alberto Gonzales probably won't continue in office much longer according to Charles Schumer. Attorneys were apparently fired for political reasons. President Bush says that timetables for Iraq withdrawl are "disastrous." Harry Reid responded with "Why doesn't he get real?" Houses were flooded in Haiti and the Dominican Republic due to persistent rain. (This frequency had interference from both sides: an unknown signal on 6175 khz, and China Radio International on 6190 khz. Cuba on 6000 khz was a clearer signal but also not as strong as the signal on 6180 khz. Also, the signal on 6000 khz dropped out for a couple seconds at times.)

Tribunals in Guantanamo (details not logged). The Cuban Five have been imprisoned since 1998 despite performing "anti-terrorist actions". The pressure of public opinion, especially in the USA, may help win their release. There was an editorial viewpoint discussing environmental concerns. Resource exploitation. Guatemala indigenous summit. "The planet is at the edge of destruction." The half-hour concluded with an interview with USA solidarity activist Alicia Jrapko.

* 31 Mar 2007, 1540 UTC, 9425 khz (All India domestic): This frequency is listed as "All India domestic." Although it is only listed as a 5-minute English broadcast, I heard English outside of the broadcast schedule for a few minutes. It was a difficult signal to understand so I didn't log anything. Eventually I heard the male English speaker finish, and a female speaker came on in a different language.

I've only had weak, noisy receptions of WBCQ this month. Sigh.

Radio Havana Cuba is currently broadcasting in English to North America on 6180 khz, and it sounds great here. I believe this is the strongest reception I've had of RHC inside my current apartment. I'm using my battery-powered Eton E5 without an additional antenna.

I haven't heard from NHK Radio Japan lately; China Radio International signals are weak; and Radio Taiwan International comes in well but they sure have toned down their accusations against China recently.
authored by weatherall at 10:24 PM No comments:

Kim Andrew Elliott posted an article about the DRM exhibit at the recent Winter SWL Fest in Pennsylvania. Here's a quote from the introduction:

A[n] exhibit of Digital Radio Mondiale, the new technology for digital transmission below 30 MHz, has been held at the Fest since 2003. This exhibit features DRM-capable receivers picking up actual DRM transmissions.

At this year’s SWL Fest, March 8 to 10 near Philadelphia, the DRM exhibit expanded to include other forms of digital radio: 1) wi-fi internet radio appliances and 2) HD Radio (IBOC), the U.S. domestic digital radio system.

authored by weatherall at 1:31 PM 4 comments:

I contacted Redsun through b2s.com to ask about purchasing RP3000/RP3100 radios. Redsun told me that C.Crane will be their distributor for the USA, and that the new radio models will be available in July 2007. This raises questions about future relations between Redsun and Kaito. More people know about C.Crane than Kaito because C.Crane regularly runs advertisements on the radio here in the USA. Because of that, C.Crane may be able to provide wider distribution.

A recent comment asked about SSB capability for the Redsun RP2100/Kaito KA2100. The '2100 does not have SSB built in, but includes an IF output jack. It's possible to make or purchase a device that receives the IF output from the radio and decodes it as an SSB signal. An SSB decoding device for the '2100 is available for purchase on eBay.

If any readers have questions or comments about using SSB signals via the '2100, you're welcome to comment here.
authored by weatherall at 9:15 PM 1 comment:

A recent post here on Cobalt Pet collected user comments and reviews on the Redsun RP2100/Kaito KA2100. I started that post because I didn't plan to buy one, although people visiting this site demonstrated a lot of interest in it. I was very happy with the results, and I hope it provided benefits to readers as well.

I'd like to start another reader discussion on an important topic. Power Line Communication (PLC) or Broadband over Power Lines (BPL) is a subject of concern for both shortwave radio listeners and amateur radio operators. Both groups of users operate in the High Frequency (HF) range of 3 mhz to 30 mhz. BPL technologies also use this frequency range. Initial testing of BPL technology has generated interference reports from ham radio operators to the FCC, with varying degrees of success. BPL is an issue that is also starting to appear in national legislation.

I welcome you to comment here to discuss the potential impact of BPL for shortwave or amateur radio. Do you live near a BPL network? Are there plans to set up BPL in your area? How can shortwave radio listeners respond if BPL interference results in an effective denial-of-service for international shortwave broadcasts, and what will the broadcasters do about it?
authored by weatherall at 11:15 AM 5 comments:

Late last year, Deutsche Welle acted quickly to confirm my reception reports with a QSL card, a station banner, and a sticker (not photographed). My reception reports were emailed on 29 September 2006, and I received the items in the mail on 10 November 2006. Check out these fabulous prizes: 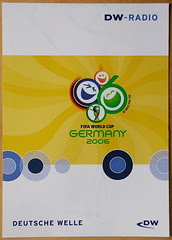 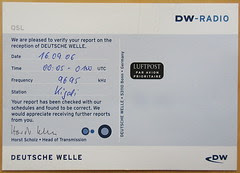 Copyright (c) 2005-2017 Cobalt Pet Shortwave / Mediumwave weblog. All rights reserved. Content appearing on this website may not be reproduced in whole or in part without written authorization. Please be aware that this site uses cookies.

What can you find when you tune in radio stations from hundreds or thousands of miles away? The Cobalt Pet shortwave and mediumwave weblog (or blog) is an English-language site featuring shortwave reception reports, product reviews, photos, tips, radio news, DXing discussion, and links. Articles focus on international broadcasters, utility stations, amateur / ham radio, mediumwave (AM broadcast band), and portable radio receivers. Readers are invited to leave feedback and ask questions.